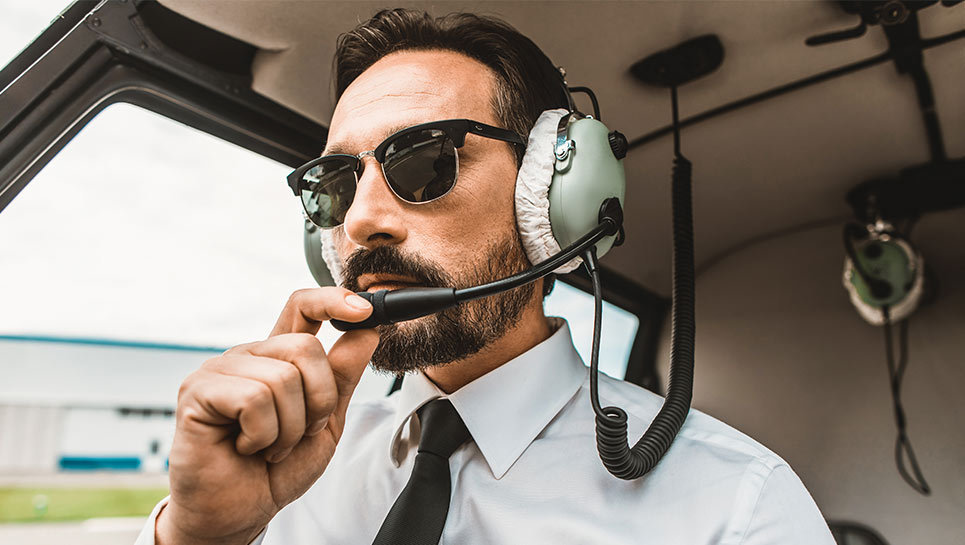 Language of the sky

The language used in the cockpit sounds technical and only aviation professionals understand it. Pilots communicate with each other and air traffic control in English, regardless of their own native language or any other languages they speak. Aviation English is in some ways a separate language compared to the one spoken on the ground. Therefore, even native English speakers have to learn it. What makes it so special?

Aviation English has been the de facto international language of civil aviation since the International Civil Aviation Organization (ICAO) recommended English to be universally used for “international aeronautical radiotelephony communications” in 1951. Why was English chosen to be the language of the sky? This decision was related to the fact that English-speaking countries dominated the design and manufacturing of aircraft, as well as much of their operations. Although, it was just a recommendation by ICAO, English was widely accepted in aviation.

Speaking the same language for pilots, crew and air traffic control is the core factor for aviation safety – miscommunication could become one of the reasons why some aviation accidents may happen. One of the aviation regulation-changing accidents happened in Tenerife in 1977. It had a lasting influence on the industry, highlighting, in particular, the vital importance of using standardised phraseology in radio communications. Cockpit procedures were also reviewed, contributing to the establishment of crew resource management as a fundamental part of airline pilots’ training.

In 2001, ICAO determined English as the standardised language of air transport. Following that, ICAO published a directive stating that all aviation personnel, including pilots, flight attendants and aircraft controllers, must pass an English proficiency test and meet the requirements. Before that, the language skills were not checked in a standard way.

Those, who want to be pilots and apply for aviation studies, need to make sure their language skills meet at least the ICAO Level 4 requirements for the English language. It means that a pilot is expected to pronounce words clearly, although stress, rhythm, and intonation may be influenced by their native language. Nevertheless, even if English is a pilot’s second language, their vocabulary range and accuracy must be sufficient to communicate effectively on common, concrete, and work-related topics. Grammar is not forgotten in the test, thus a pilot is expected to creatively use well-controlled basic sentences and grammatical patterns.

When pilots and air traffic controllers communicate, they use special aviation terminology, speak in a technical manner and this makes their language sound like a special code. This code does not change, whether the plane flies over London, Istanbul, Hong Kong or Brazil and connects to the local air traffic control tower. Have you heard “wilco”, “approach” or “pan-pan” in the movies about aviation? They are real and used daily in the cockpit procedures.

The language of aviation consists of a mix of professional jargon and traditional English. Aviation English has a special alphabet which makes spelling on radio connection easier-to-understand and approximately 300 aviation terms. Every pilot must know all of them.

Learning how to speak on aircraft radio starts with phonetic alphabet and memorizing a large number of three-letter abbreviations. Many of these were created in the days of Morse code when radio messages needed to be as short as possible.

Although learning to understand and speak the code pilots speak may be the most challenging aspect of pilot studies, it is crucial to the profession.

The ICAO created the International Radiotelephony Spelling Alphabet, tied it to the English alphabet, to ensure that letters are properly pronounced and understood by air traffic controllers and pilots around the world, regardless of what languages are spoken. The ICAO alphabet is used to avoid mistakes caused by letters and numbers that sound similar, for example, b and d, m and n. This is the reason why a pilot would read the aircraft number “LY FTN” as Lima – Yankee – Foxtrot – Tango – November.

Notably, there are some variations of the ICAO alphabet – outside North America, some pilots use the non-English spelling Alfa (instead of Alpha) and Juliett (instead of Juliet). These variations were created as some non-English or non- French language speakers may not pronounce “f” when it is spelled “ph”. The extra T is added to Juliet because in French a single T at the end of a word is silent.

The special alphabet is not the only aviation English feature that differs from the traditional language. Besides the alphabet, pilots learn the standard aviation phraseology. As mentioned earlier, they have to remember the meaning of around 300 standard phrases and special terms. Learn the meanings of the most popular and most important phrases.

Affirm: Contrary to popular belief, pilots do not say “affirmative” when they mean “yes” – the correct term is affirm, pronounced “AY-firm”.

Deadhead: This refers to a member of the airline crew who is travelling in a passenger seat.

Mayday: This is the one nobody wants to hear. It does not appear among the most common ones but it probably is the most important. It is a distress call for life-threatening emergencies, such as complete engine failure. It comes from the French “m’aidez” (“help me”). Pilots must say it 3 times at the beginning of a radio call.

Pan-pan: The next level of emergency down from mayday, it’s used for situations that are serious but not life-threatening. It originates from the French word “panne”, meaning breakdown. You repeat it three times: “pan-pan, pan-pan, pan-pan”.

Standby: This means “please wait” and this is usually said when an air traffic controller or a pilot is too busy to take a message.

Wilco: An abbreviation of “will comply”, it means the pilot has received the message and will comply.

We use cookies and other similar technologies to help provide our Services, to advertise to you and to analyze how you use our Services and whether advertisements are being viewed. We also allow third parties to use tracking technologies for similar purposes. If you are using our Services via a browser you can restrict, block or remove cookies through your web browser settings. The Help menu on the menu bar of most browsers also tells you how to prevent your browser from accepting new cookies, how to delete old cookies, how to have the browser notify you when you receive a new cookie and how to disable cookies altogether. To learn more, click here.
Necessary cookies Always Enabled

These cookies are necessary for the website to function and cannot be switched off in our systems. They are usually only set in response to actions made by you which amount to a request for services, such as setting your privacy preferences, logging in or filling in forms. You can set your browser to block or alert you about these cookies, but some parts of the site may not work then.

These cookies allow the provision of enhance functionality and personalization, such as videos and live chats. They may be set by us or by third party providers whose services we have added to our pages. If you do not allow these cookies, then some or all of these functionalities may not function properly.

These cookies allow us to count visits and traffic sources, so we can measure and improve the performance of our site. They help us know which pages are the most and least popular and see how visitors move around the site. All information these cookies collect is aggregated and therefore anonymous. If you do not allow these cookies, we will not know when you have visited our site.

These cookies are set through our site by our advertising partners. They may be used by those companies to build a profile of your interests and show you relevant ads on other sites. They work by uniquely identifying your browser and device. If you do not allow these cookies, you will not experience our targeted advertising across different websites.