Articles Did You Know?

Did You Know That Airbus Aircraft Have Identical Flight Decks?

According to aviation regulations, it is forbidden for passengers to visit the pilot cockpit during a flight. However, aviation fans might have this opportunity. Everyone, who has visited different types of Airbus aircraft, has noticed that all of these aircraft decks made them feel as if they were on the same aircraft. And actually, they are right – Airbus flight decks are nearly identical.

Airbus has prioritised commonality throughout its diverse product line since the creation of their first aircraft. The commonality concept was taken to a new level in the 1980s with Airbus’ first single-aisle aircraft, the A320, and the introduction of digital fly-by-wire controls. Identical cockpits and operating procedures were applied to each of the A320 Family’s versions – the A318, A319, A320 and A321 – allowing pilots to fly all these aircraft with a single type rating. Nowadays Airbus passenger aircraft (the single-aisle A220 and A320; twin-engine A330 (including its A330-900 and A330-800 variants; new-generation A350 XWB wide-body and double-deck A380) feature nearly identical flight decks and similar handling characteristics.

What advantages does this feature bring?

Let’s start from advantages for pilots. They are positioned for an easy transition between the A320 Family and Airbus’ larger A330, A340 and A380 aircraft through straightforward and rapid differential training.

Also, Airbus commonality enables Mixed Fleet Flying, that is a pilot’s ability to be current on more than one Airbus fly-by-wire aircraft type at a time. This means that an A320 Family-qualified pilot can step onto any of the four aircraft at any time – allowing airlines with multiple aircraft family versions to schedule the aircraft best matched to passenger bookings of a specific route on any day, with a range of seating options from 100 to 240 passengers.

The above-mentioned advantages for pilots are benefits for airlines as well. How? All of this leads to lower training costs for airlines and considerably increased crew productivity. Besides, it is more economical for an airline to recruit new pilots who already are Airbus-qualified. Airlines save hundreds of thousands of euros (per aircraft) for pilot training.

Did You Know How close can a plane fly to another aircraft? 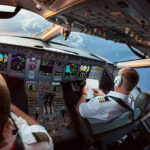 Mandatory training to prevent upsets and recover from unexpected situations

We use cookies and other similar technologies to help provide our Services, to advertise to you and to analyse how you use our Services and whether advertisements are being viewed. We also allow third parties to use tracking technologies for similar purposes. If you are using our Services via a browser you can restrict, block or remove cookies through your web browser settings. The Help menu on the menu bar of most browsers also tells you how to prevent your browser from accepting new cookies, how to delete old cookies, how to have the browser notify you when you receive a new cookie and how to disable cookies altogether. To learn more, click here.
Necessary cookies Always Enabled

These cookies are necessary for the website to function and cannot be switched off in our systems. They are usually only set in response to actions made by you which amount to a request for services, such as setting your privacy preferences, logging in or filling in forms. You can set your browser to block or alert you about these cookies, but some parts of the site may not work then.

These cookies allow the provision of enhance functionality and personalization, such as videos and live chats. They may be set by us or by third party providers whose services we have added to our pages. If you do not allow these cookies, then some or all of these functionalities may not function properly.

These cookies allow us to count visits and traffic sources, so we can measure and improve the performance of our site. They help us know which pages are the most and least popular and see how visitors move around the site. All information these cookies collect is aggregated and therefore anonymous. If you do not allow these cookies, we will not know when you have visited our site.

These cookies are set through our site by our advertising partners. They may be used by those companies to build a profile of your interests and show you relevant ads on other sites. They work by uniquely identifying your browser and device. If you do not allow these cookies, you will not experience our targeted advertising across different websites.